Only YOU Can Protect Net Neutrality

Labels: do it for splashy, freedom, open internet, stand 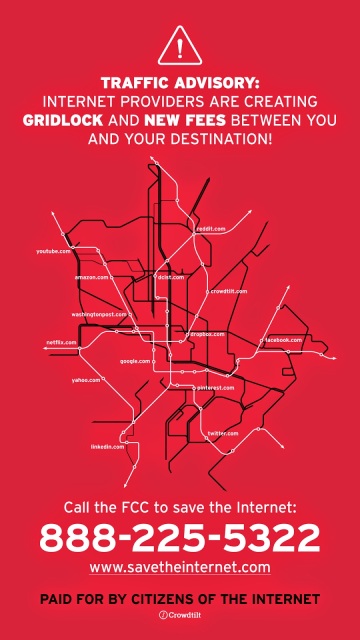 As you may have seen from all the recent discussion around Net Neutrality, we find ourselves at a critical crossroads for the continued development of an open Internet. This Thursday, the FCC will be unveiling their “Open Internet” proposal. If we all want to protect universal access to the communications networks that we all depend on to connect with ideas, information, and each other, then we must stand up for our rights to connect and communicate. We must ensure that our representatives know how important the open Internet is, and that we demand nothing less that real Net Neutrality by having the FCC reclassify Internet Service Providers as Title II common carriers. What is a common carrier? A common carrier is a company “forced to offer service indiscriminately and on general terms.” Common carriers cannot engage in “individualized bargaining.” if we as society believe there should be basic and open access to certain entities — telephone lines, trains, etc. — then how can that NOT extend to the Internet?

If the Internet is important to you personally or professionally, please take some time to review the information below and consider joining reddit, large and small tech companies, venture capitalists, young entrepreneurs, musicians & artists, religious groups, teachers, parents, and everyday citizens and take a stand.

The reddit community has been working hard to protect Net Neutrality with advocacy groups, companies and concerned individuals, and we are seeing real results at the FCC and the government. Over last week, congressmen & even other FCC commissioners are asking the Chairman Tom Wheeler to not move ahead with the flawed “Open Internet” proposal. Now is the time for you to give voice to the great & open Internet. The rulemaking process can take upto a year so we need to be ready to protect Net Neutrality for the long haul.

It’s important to take action today and this week, but please know that protecting the Internet as we know it will be a constant and ongoing fight.

Outside the US? You can still participate in this International action asking concerned citizens to “Say No to the Internet Slow Lane”

Call Congress
Go to OpenCongress & type in your zipcode.
Pick up the phone and call each of the these folks. Believe it or not, someone will answer the phone, and phone calls make a difference.
Politely tell the congressional staff that picks up to “Have the FCC classify internet as a Title Two common carrier.” Ask them to repeat what they wrote down.

Spread the word: Have a friend or family member that doesn’t understand net neutrality?
Have them watch this informational video video: 11min; 4min; 2min; read this, or just look at this picture.

Join the May15th Day of Action to Save the Internet
Sign-up to join the rally Thursday morning at the FCC in DC
Sign the NoSlowLane petition
If your representatives who have signed on to the CPC letter supporting Net Neutrality, make sure to call and thank them.
If your senators have published a letter to the FCC supporting Net Neutrality, make sure to call and thank them.
Call the White House and make sure they know you support Net Neutrality
Show the world what the FCC’s “slow lane” looks like and add the #StopTheSlowLane code to your site
Write a Letter to the Editor for your local paper
Join or support the protest outside the FCC in Washington, DC
Share your voice on Twitter. Suggested tweets:
We support #NetNeutrality and call on the @FCC to ensure companies large and small have equal access to the Internet
#NetNeutrality and an Open Internet is essential to maintaining a level playing-field for innovation. We call on the @FCC to protect it

What is Network Neutrality? A Quick Non-Technical Explanation
How the FCC Makes Its Rules
Net Neutrality: What You Need to Know
Big Cable says broadband investment is flourishing, but their own data says it’s falling
Why the tweaks to Chairman Wheeler’s proposal reported last night just aren’t good enough: Evaluating the FCC Chairman’s Revised Net Neutrality Proposal
3 Ways the FCC Chairman is Reversing the 2010 Rules
Why the new FCC Proposal on Net Neutrality is Disasterous for Startups, Consumers, and the Economy
Net Neutrality Legal Binary.  Explaining “Title II” vs Everything Else

Thank you to the reddit community and to all the groups, companies and individuals who have been working so hard to fight for Net Neutrality. Together we can protect Net Neutrality.

Keep up with the latest development updates, community announcements, and general reddit tomfoolery.